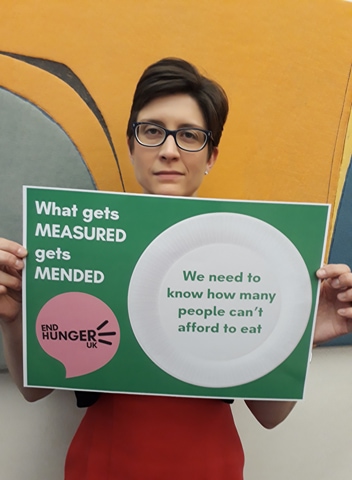 Alison Thewliss, SNP MP for Glasgow Central, has today called on the UK Government to do more to measure the extent of food insecurity across the country, to fully illustrate the root causes of this growing problem.

Thewliss, who has campaigned on the issue of food banks and food insecurity, spoke following the introduction of a ten minute rule motion by Emma Lewell-Buck, Labour MP for South Shields, asking the Government to better report on food security through the use of official statistics.

“I was disappointed – but far from surprised – to see The Trussell Trust report earlier this month that outlined that food bank use in Scotland has risen by 20% in the last year. Not only that, the research indicated that problems processing benefit claims represented the biggest cause for referrals to food banks in Scotland, making up around 42% of cases. This is completely unacceptable, and the UK Government should be ashamed that its actions are driving people further into food poverty.

“I fully support Emma Lowell-Buck’s Bill – measuring the scale of this problem is a necessity, and is a move supported by organisations including the Child Poverty Action Group (CPAG), Oxfam and the UK Food Poverty Alliance, amongst many others. The UK Government continues to deny there is a problem, and seem unwilling to act on the testimony of charities and those having to visit food banks. I am hopeful that a formal measurement will force them to take notice.

“They would do well to follow the steps taken by the Scottish Government who last year set up an independent working group on food poverty, and whose findings are now being built on by the ‘Menu for Change’ partnership – an alliance of charities who have come together to evolve the response to food poverty in Scotland.

“The local response in Glasgow to the issue of hunger has been admirable – for example, Dalmarnock Primary School hosted a summer club where parents and children could eat a hot meal together during the summer holidays, offering key support for many families struggling to make ends meet.

“It is a scandal that the UK Government is forcing people into desperate situations, I will continue to challenge their failure to acknowledge the root causes of food poverty.”