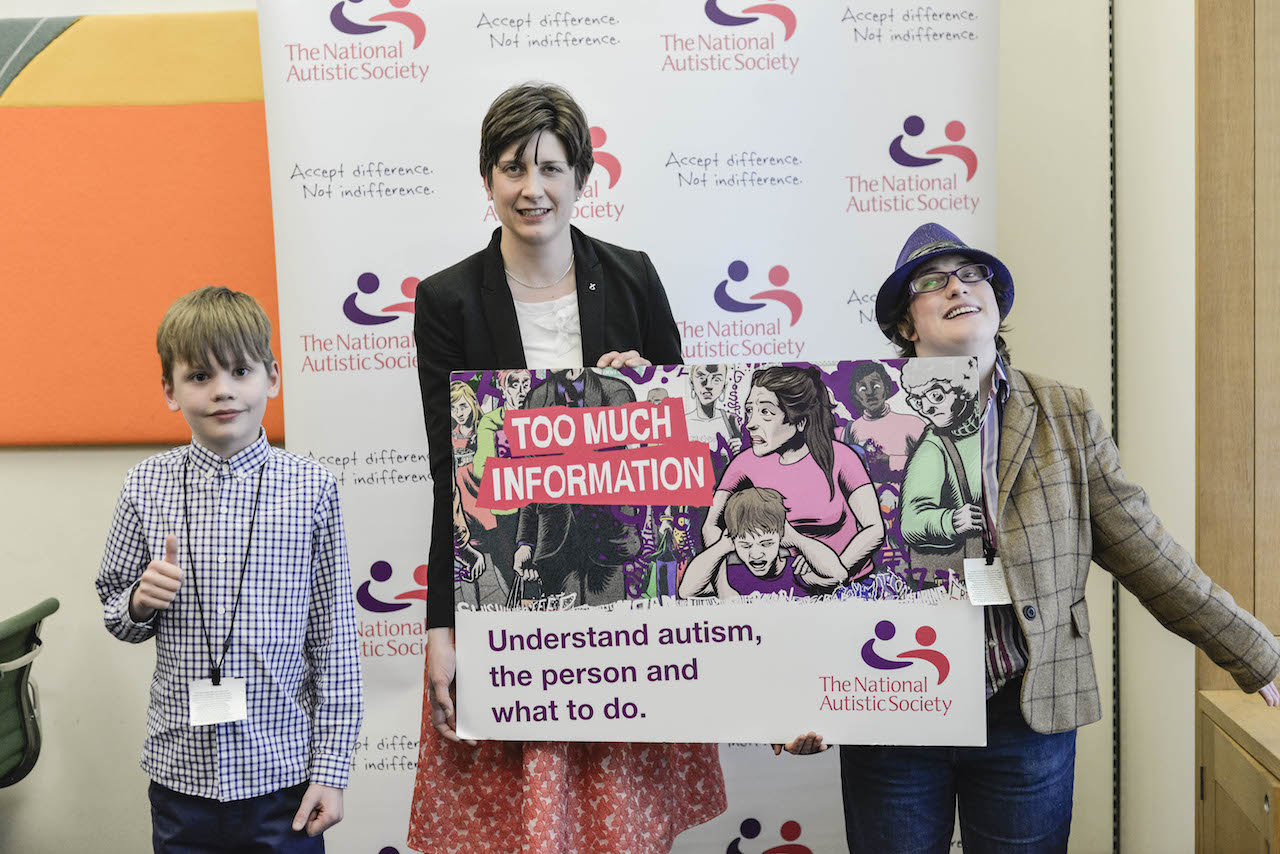 On Monday 11 April Alison Thewliss, MP for Glasgow Central, was one of nearly 100 MPs who attended an event organised by The National Autistic Society who recently launched their Too Much Information campaign. Ms Thewliss is backing the charity’s new campaign to improve public understanding of autism.

As part of the campaign, the charity has released a report (Too Much Information: why the public needs to understand autism better) which revealed how poor public understanding of autism is pushing autistic people and their families into isolation.

This is why the National Autistic Society is calling on the public to find out more about autism so they can respond to autistic people with more understanding.

More than 1 in 100 people are on the autism spectrum. This means that someone sees, hears and feels the world in a different, often more intense, way to other people. Autistic people often find social situations difficult and struggle to filter out the sounds, smells, sights and information they experience, which means they feel overwhelmed by ‘too much information’ when out in public.

In 2015, a YouGov poll found that over 99.5% of the people in the UK had heard of autism. However, just 16% of autistic people and their families said that the public had a meaningful understanding of autism. This means that while lots of people have heard of the word autism, very few actually understand what it means to be autistic.

The charity has also released a short film, shot from the point of view of a child on the autism spectrum experiencing ‘too much information’ as he walks through a shopping centre. It shows how painful and overwhelming it is for the boy – and how much more difficult it is when people make nasty remarks or throw judgmental glares at him and his mother. The film concludes with the words: ‘I’m not naughty: I’m autistic’.

The Marshall family, whose son Alex plays the little boy in the campaign film, also attended the event in Parliament on Monday. Alex is a ten-year-old autistic boy, and he and his parents share the National Autistic Society’s passion to improve public understanding of autism.

Alex’s mum and dad, Ben and Kathryn Marshall, said: “When Alex was filming, we were watching him from the balcony and there was a woman who gave this look, a little glance. Everybody watching with us said, ‘That’s the look!’ We all knew it. It was that split second of contempt which says, ‘why can’t you control your child?’

“That’s why we’re so thrilled to be involved in the Too Much Information campaign and get the chance to help people realise how big a difference they can make to families like ours, by simply showing a little understanding rather than throwing us a judgmental look.”

Alison Thewliss said: “The National Autistic Society’s important report shows why we must work harder to improve public understanding of autism. No-one should ever feel so misunderstood that they sometimes can’t leave their home.

“That’s why I’m pleased to support the Too Much Information campaign and am encouraging my constituents to learn a little bit more about autism.

“A basic understanding of autism could help open up the world for autistic people and their families in our community and across the UK.”