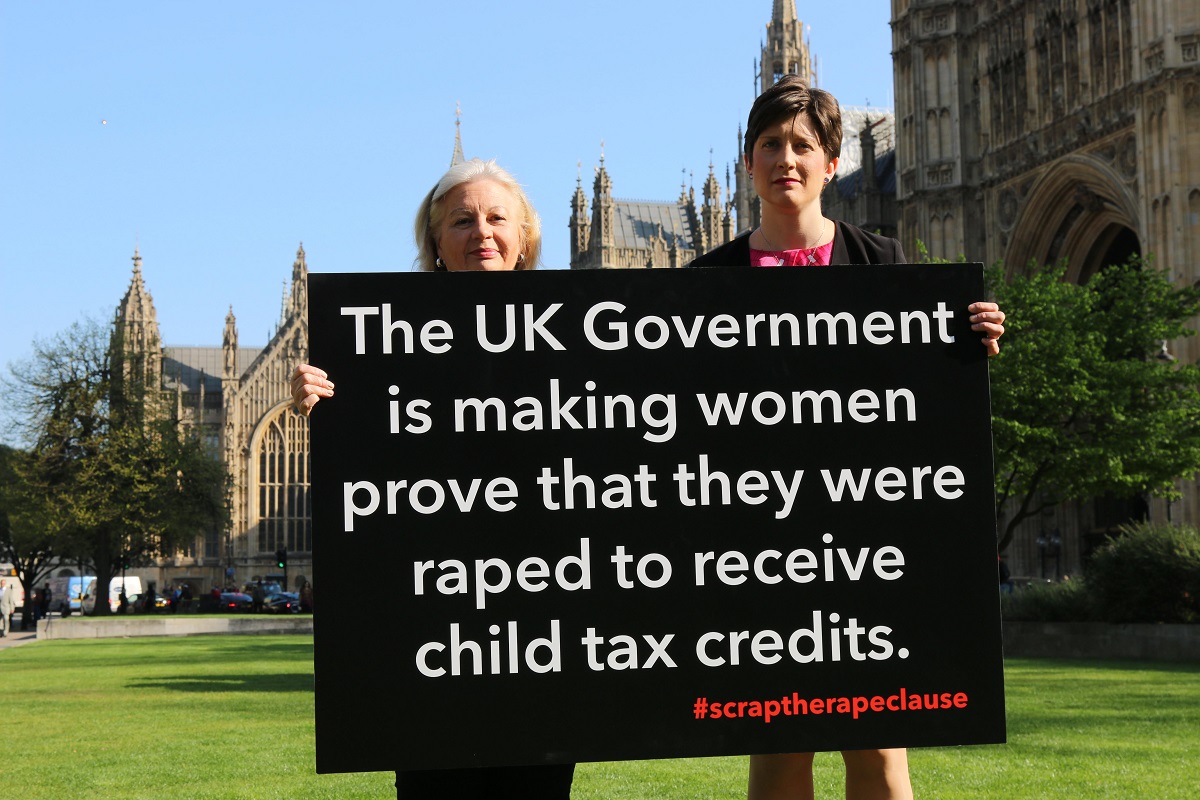 A two child limit and rape clause for tax credits came into force today, which a campaigning MP says will unleash untold chaos and poverty for ‘just about managing families’ and rape survivors.

In July 2015, the then Chancellor of the Exchequer, George Osborne, announced in his summer budget plans to slash child tax credit payments to just two children per family and implement a ‘non-consensual sex exemption’, dubbed the rape clause.

The new policy, which came into force at midnight last night, requires tax credit claimants, whose third or subsequent child was conceived as a result of rape, to prove this to social workers and health professionals in order to qualify for the exemption.

Faith leaders, women’s welfare groups, trade unions and child poverty campaigners have all condemned the policy, with many sexual violence support charities refusing to act as third party verifiers for the Government.

“Today the UK government stooped to a new low, even by their austerity obsessed standards. Minister are now unleashing untold chaos and poverty for some of the most vulnerable women and families in this country – indeed, the very “just about managing” families Theresa May spoke about upon taking office as Prime Minister.

“As of midnight last night, a two child limit on child tax credits and universal credit – which is tantamount to social engineering – came into force. It largely penalises families who are already in work, so this has very little to do with reducing the welfare bill but is, instead, an ideological attack on the lowest earning families in our society.

“Independent analysis shows that the two child limit alone will mean a loss of up to £2,800 every year per child for hardworking families. If you had a third child at 11.59pm last night, over the next 18 years you could be £50,000 better off than a family whose third child was born a minute later.

“Analysis also shows that well over 200,000 children will now move into relative poverty as a result of this deeply flawed two child limit. We should be reducing child poverty, not adding hundreds of thousands more to this miserable statistic.

“What’s most horrifying is the rape clause, which is a vile policy in total chaos. Ministers are willing to give an exemption to those women whose third child was conceived as a result of rape, but they want them to prove this in a traumatic assessment from healthcare professionals and social workers. This is utterly appalling and will only seek to make rape survivors relive the trauma and brutality of the sexual violence they experienced at the hands of their perpetrator. It must be one of the most inhumane and barbaric policies ever to emanate from Whitehall.

“The rape clause has been found, even today, as being totally unworkable, with wholly inadequate guidance sneaked out during the night. There has been no proper sexual violence awareness training for healthcare professionals and social workers who’ve been asked to arbitrate on whether a woman’s child was conceived as a result of rape.

“Ministers have ducked and dived at every turn to try and avoid talking about this policy, presumably because they know it’s so unpalatable. The UK government railroaded this through Parliament using a statutory instrument which meant MPs couldn’t vote upon or debate it. It’s all well and good that the UK government has now conceded that this will need to be referred to a Delegated Legislation Committee when Parliament returns after the Easter recess. However, the fact remains, the policy is now live and will cause untold distress. The UK government must step in today and suspend this right now before serious damage is done.”